The potassium channel KCNQ3 is required for our brain to generate accurate spatial maps. In mice, defects in KCNQ3 function have measurable effects on the internal navigation system. The findings of a research team including researchers from the Leibniz-Forschungsinstitut für Molekulare Pharmakologie (FMP) in Berlin, now appeared in Nature Communications, are also relevant for Alzheimer's-type dementia research.

Among other physiological processes, potassium is required for muscle and nerve cell excitability. Potassium ions cross the outer cell membrane via a variety of ion channels and thereby generate electrical currents. Prof. Thomas Jentsch's (NeuroCure PI) team at the Leibniz Research Institute for Molecular Pharmacology (FMP) in Berlin identified the genes encoding the potassium channel family KCNQ2-5 two decades ago and demonstrated that mutations in KCNQ2 and KCNQ3 can cause hereditary epilepsy in humans. Pharmaceutical companies were able to develop targeted anti-epileptic drugs as a result of this pioneering research.

Now, teams of molecular biologists led by Thomas Jentsch and neurophysiologists supervised by Alexey Ponomarenko (formerly a member of FMP, now professor at Friedrich-Alexander-Universität Erlangen-Nürnberg) have discovered that KCNQ3 may also play a role in Alzheimer's disease and other cognitive disorders.
Normally, the transmitter acetylcholine inhibits neuronal potassium flow, which is necessary for the cortex's excitability and thus for memory and attention. It is well established that Alzheimer's patients gradually lose this so-called cholinergic neuromodulation. 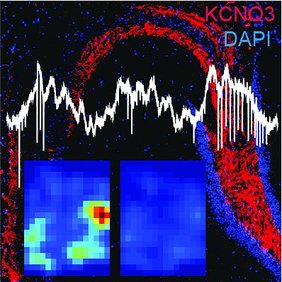 Kcnq3 immunofluorescence in hippocampus, firing of a pyramidal cell in time (white traces, theta oscillations and spikes)
and space (place fields of spike bursts, left, and of single spikes, right) in a Kcnq3 knockout mouse.
Modified from Gao et al., 2021

The current study examined the role of KCNQ3 channels in the neuromodulation of the brain's navigation system. The so-called place fields, a discovery for which a Nobel Prize was awarded several years ago, serve as an internal space map for the brain. “We found how various signals generated by place cells under the control of KCNQ3 channels interact with brain rhythms to form precise spatial maps,” says Alexey Ponomarenko.

The knock-out mice with a defective KCNQ3 channel generated by Thomas Jentsch's group revealed a different picture: whereas the activity patterns of place cells in healthy mice were structured in time and space, in knock-out mice, the synaptic transmission by single or nearly simultaneous multiple (burst) signals of place cells was disorganized. “When bursts are fired, they typically have a certain rhythm. In the mutants, on the other hand, the bursts are not controlled by the rhythm, but are fired at completely random times or phases of the rhythm, as Ponomarenko explains. "This effectively suppresses single action potentials and creates an imbalance in the activity patterns of place cells."

“While the data to date are insufficient to guide clinical applications, our findings suggest that the KCNQ3 channels could be a potential target for future drug research to treat Alzheimer's-type and other dementias,” Prof. Ponomarenko emphasizes, “at least in the early stages, when place cells are likely still present but cholinergic neuromodulation has already subsided.” Additional research is required to gain a better understanding of KCNQ3's role in the brain.