If certain signaling cascades are misregulated, diseases like cancer, obesity and diabetes may occur. A mechanism recently discovered by scientists at the Leibniz- Forschungsinstitut für Molekulare Pharmakologie (FMP) in Berlin and at the University of Geneva has a crucial influence on such signaling cascades and may be an important key for the future development of therapies against these diseases. The results of the study have just been published in the prestigious scientific journal 'Molecular Cell'.

Cell growth and cell differentiation as well as the release and efficacy of hormones such as insulin depend on the presence of lipids. Lipids are small molecules resembling fat. They are the building blocks of cell membranes, and they also serve as molecular switches in signaling cascades. Such cascades play a crucial role in the control of cell growth and division as well as in differentiation processes such as the formation of new blood vessels referred to as angiogenesis. If signaling cascades are disturbed, diseases such as cancer or metabolic disorders such as obesity and diabetes can occur. The ability to influence the enzymes involved in the biosynthesis of signaling lipids in cells could thus serve as a starting point for the treatment of these diseases. 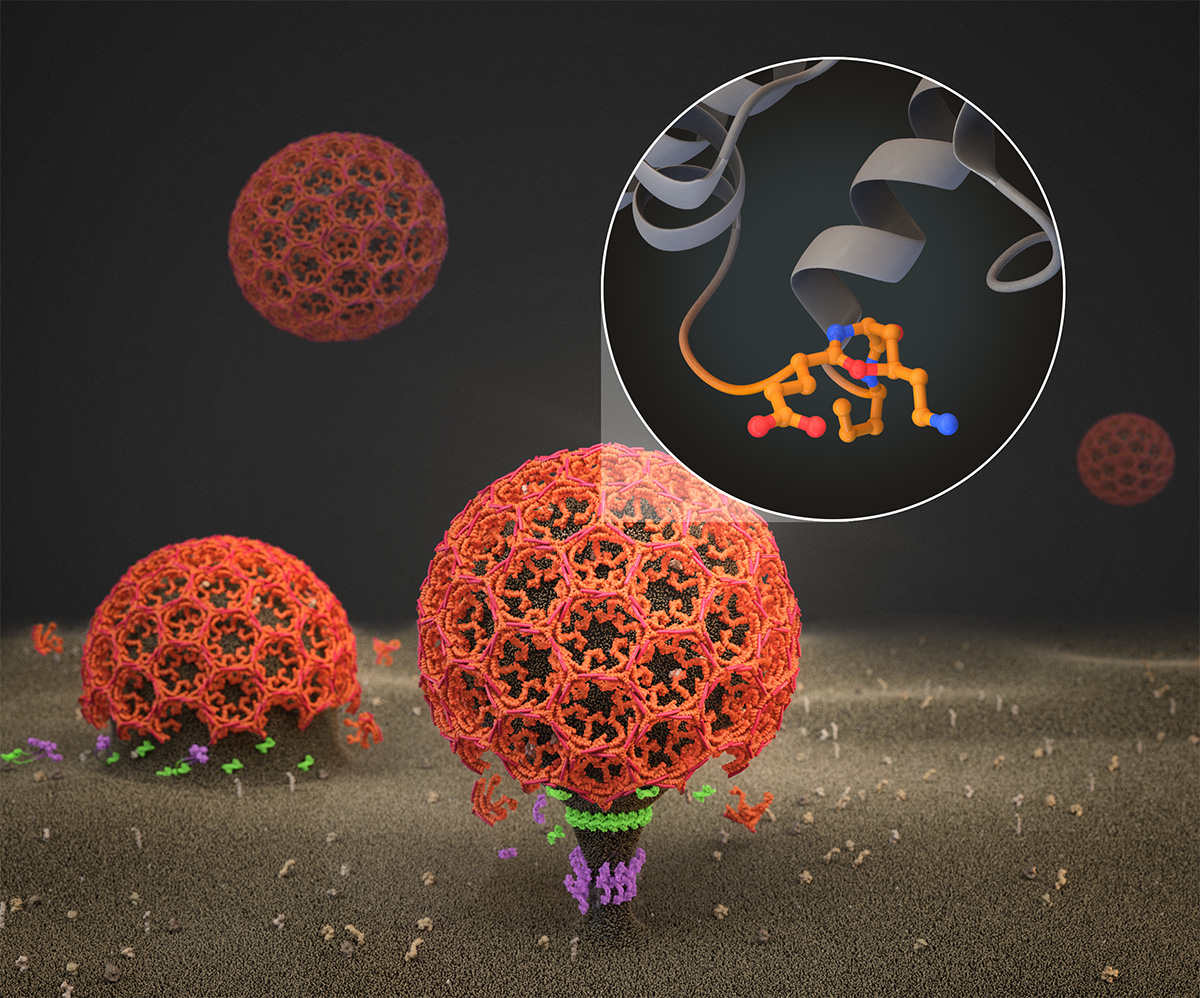 Signal receptor-containing vesicles (red) form on the inside of the cell membrane (brown) and bud off into the cell. The magnifying glass shows molecular details of the active lipid kinase PI3KC2A. This lipid kinase synthesizes signal lipids, which are necessary for this process and the subsequent signal transmission. Visualization: Thomas Splettstößer

The team around Professor Dr. Volker Haucke at the FMP pursued this approach: Years of work allowed the team to successfully express and purify the lipid kinase PI3KC2A and to analyze the enzyme in detail. The PI3KC2A kinase enzyme performs crucial functions in receptor uptake, cell division, the release of and signaling by insulin, and in angiogenesis. Together with Dr. Oscar Vadas of the University of Geneva, the FMP Team performed intricate studies on the structural biology and cell biology of the kinase. Their studies revealed an initially inactive, auto-inhibited form of the PI3KC2A kinase in the cytoplasm of cells. External signals can then activate the kinase as it becomes recruited to the cell membrane. Such signaling cascades are initiated by the docking of protein ligands such as insulin or growth factors to receptors in the cell membrane. The ligand-bound receptors become activated and transmit signals into the cell interior. This receptor signaling process is accompanied by the invagination of the cell membrane to eventually form vesicles that deliver the active membrane-bound receptor into the cytoplasm. Lipid kinases such as PI3KC2A participate in the process of vesicle formation and in the signaling cascades inside the cell.

For the first time, the team of scientists was able to observe the transition of PI3KC2A from the inactive into an active form. Dr. Oscar Vadas describes this mechanism: "In its inactive form, the kinase exists rolled up looking as if it had wrapped its 'arms' around itself. In order to activate the kinase, two specific components of the cell membrane have to be in the same location at the same time. When this happens, the kinase unfolds its 'arms', and each 'arm' binds to one of the two components”. The activated kinase within seconds synthesizes many signaling lipid molecules. In turn, these signaling lipids control the uptake of activated signaling receptors into the cell (image) and thereby regulate processes such as cell growth, division and differentiation.

These findings are of great importance for basic research as the Berlin/Geneva team has provided unprecedented molecular insight into the central cellular process of receptor uptake. Moreover, the scientific work presents a major leap toward the pharmacological manipulation of PI3KC2A and related kinases. "For the first time, we have a handle on a mechanism, which may eventually enable us to alter PI3KC2A lipid kinase activity. This may provide a direct target for therapies", emphasizes Professor Dr. Volker Haucke. For example, small molecules that block PI3KC2A activity could serve as anti-tumor agents given that angiogenesis is important for nutrient supply to tumors. As studies with mice suggest, the pharmacological inhibition of PI3KC2A activity should bring angiogenesis to a stop. The FMP scientists in Berlin are now looking for such agents.

"We have discovered a new promising target and are keen to further explore its therapeutic potential", promises Professor Dr. Volker Haucke referring to the initiated compound search. While the FMP does not develop drugs itself, the institute aims to provide new leads for future drug development. Professor Haucke is confident: "In this case, we expect to identify candidate molecules that may at some point in the future become clinically useful."