Improving the quality of life and social participation of people with impaired brain function is the aim and objective of Einstein Professor Dr. Surjo Soekadar. He and his team are busy developing and testing highly refined neurotechnologies, including technologies for neurostimulation and brain-computer interfaces. Based at the Department of Psychiatry and Psychotherapy on Campus Charité Mitte, Prof. Soekadar heads the department’s Division of Translation and Neurotechnology and the Clinical Neurotechnology Lab. Awarded in addition to an existing ERC Starting Grant, the new Proof of Concept Grant totaling € 150,000 will help the researchers refine a promising new concept and advance it towards a commercial product.

Neurotechnologies are technical and computer-assisted tools that can be used to analyze brain signals or modify them in a targeted manner. Neurotechnologies include brain-computer interfaces that can help to partially restore communication or mobility in severe paralysis. For example, Prof. Soekadar and his team have enabled quadriplegic patients to eat and drink independently in an outside restaurant using a mind-controlled hand exoskeleton. Another field of work for Soekadar’s team is the use of such tools in the treatment of psychiatric disorders, e.g., depression, addiction or anxiety disorder. In these disorders, various brain functions such as attention, memory or emotion control can be impaired. Thanks to an ERC Starting Grant, Prof. Soekadar and his team are in the process of developing next-generation brain-computer interfaces which are suitable for day-to-day use and capable of reading and interpreting brain activity in real time. Using non-invasive electrical or magnetic stimulation, the researchers will then enhance specific patterns of activity associated with improvements in an individual’s impaired brain function. It is hoped that the combined use of brain-computer interfaces and brain stimulation methods will play an important role in the development of effective and low side-effect treatment options for a range of disorders. 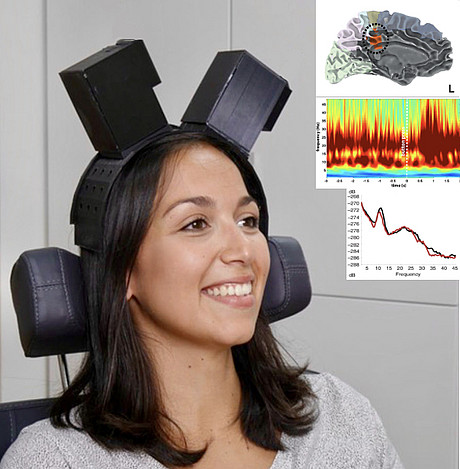 Model of an innovative device for use in non-invasive brain stimulation. The aim is to restore brain function through high-precision magnetic stimulation, even in deep-seated areas of the brain. Photo: Charité l Soekadar.

While the performance of current non-invasive brain stimulation methods such as transcranial electric and magnetic stimulation (tES/TMS) are promising, they do not allow for millimeter- and millisecond-precise modulation of neural activity in distributed and deep areas of the human brain. To access these areas, neurosurgical placement of deep brain electrodes is necessary. The researchers hope to use their proof-of-concept research to find a solution to these problems. They will test an innovative non-invasive technique in which stimulation frequencies, phase and magnetic field intensities will be adapted and refined to target specific cell types even in deep-seated areas of the brain with pinpoint accuracy. As part of the ERC Starting Grant-funded project and supported by the NeuroCure/SPARK-BIH program, Khaled Nasr, a PhD student in Soekadar’s lab, implemented a first prototype that enables the pinpoint targeting of individual brain regions. An international patent application was filed to foster fast translation of this precision brain stimulation technique into clinical practice.

Short bio – Surjo R. Soekadar
After studying medicine in Mainz, Heidelberg, and Baltimore, Surjo Soekadar completed his doctorate at the Central Institute of Mental Health in Mannheim in 2005. In addition to completing his residency in Psychiatry and Psychotherapy at the University Hospital Tübingen’s Department of Psychiatry and Psychotherapy, he also spent three years as a Visiting Fellow at the National Institute of Neurological Disorders and Stroke, in Bethesda, Maryland. After returning to Tübingen, Surjo Soekadar became Head of the Applied Neurotechnology Working Group, and completed the habilitation process in 2017. With support of the Einstein Foundation Berlin, in 2018, he was appointed Germany’s first professor of clinical neurotechnology at the Charité – Universitätsmedizin Berlin.