Deep brain stimulation (DBS) is an established treatment option for patients suffering from Parkinson's disease. In a neurosurgical procedure two electrodes are implanted in the brain to permanently stimulate specific brain regions. Setting the stimulation parameters, however, is a complex process. A research team at Charité – Universitätsmedizin Berlin has developed an algorithm that may increase efficiency. In their study, published in The Lancet Digital Health*, the researchers were able to show that the parameter settings suggested by a newly developed algorithm led to improvement of motor symptoms comparable to standard of care treatment.

Parkinson's disease is the second most common neurodegenerative disease after Alzheimer's disease. In Germany, around 400,000 people are affected, and due to demographic aging, the numbers are increasing. In addition to the Parkinsonian tremor, an involuntary trembling of the limbs, one of the symptoms that affects patients in particular is impaired motor control. “Patients feel stiff, find it harder to start and stop movements, move more slowly, and have an unsteady gait, which can lead to falls,” says Prof. Dr. Andrea Kühn, head of the Movement Disorder and Neuromodulation Unit at the Charité’s Department of Neurology and Experimental Neurology. “There is no cure for Parkinson's disease yet, but deep brain stimulation can improve many symptoms significantly, especially motor symptoms.”

Deep brain stimulation (DBS) involves a surgical procedure during which two electrodes are implanted in the patient's brain. These electrodes emit weak, short electrical impulses that stimulate the respective brain regions in a targeted and continuous manner. Wires traveling under the skin connect the electrodes to a pacemaker in the chest cavity, which is used to set a large number of different stimulation parameters. These parameters can be adapted individually to the symptoms of the Parkinson's patient. Three months after the surgical procedure, patients come in to the DBS center for several days during which different stimulation settings are tested to optimize treatment benefit. “The stimulation settings are adjusted in our special movement disorder ward. To find a good setting, we test the respective effects and side effects of stimulating the different electrode contacts systematically,” says Prof. Kühn. “We developed the StimFit algorithm to make this process more efficient and ultimately more comfortable for patients,” says Jan Roediger, lead author of the study and also part of the Movement Disorder and Neuromodulation Unit at the Charité’s Department of Neurologyand Experimental Neurology.

Based on radiological image data of the patient's brain, the algorithm calculates suggestions for an individual stimulation setting that should lead to an improvement in symptoms. Among the most important parameters that need to be considered are the current intensity and the precise positioning of the stimuli-delivering areas of the electrodes. “We used the open-source software Lead-DBS, another Charité development, to determine the exact position of the electrodes in the brain based on image data and then include it in the algorithm,” says Jan Roediger. “The next step was to train our algorithm with a dataset of over 600 stimulation settings, associated image data and effects on symptomatology.” 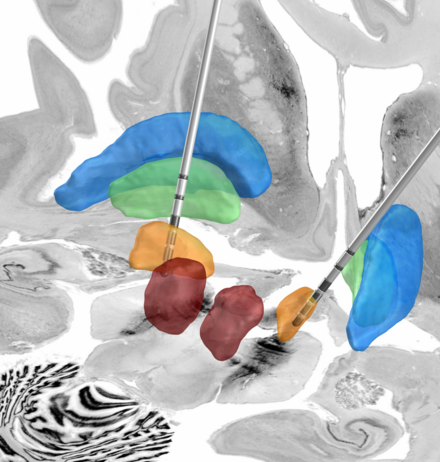 To find out whether the settings suggested by StimFit can compete with those determined through clinical testing, the research team conducted a study with 35 Parkinson's disease patients. Both types of stimulation settings – the individual settings created by traditional clinical testing (standard of care procedure) and the algorithm-based settings – were tested in succession. Neither the study participants nor the medical professionals knew the order in which the stimulation settings were applied. Subsequently, motor improvement under both stimulation conditions was assessed respectively and compared. “The patients' general mobility and also their gait improved equally well with both types of stimulation settings,” says Prof. Kühn. “This is a truly promising result. Imaging-based algorithms could significantly simplify the clinical practice of THS in Parkinson's disease and other movement disorders in the future. This would allow us to leverage the latest technical advances more fully, including multi-contact electrodes for directional stimulation.”

The expression of Parkinson's symptoms such as immobility, gait disorders or involuntary tremor varies from person to person and must be considered when setting the brain stimulators. The researchers are planning to take this fact into account in the further technical optimization of the algorithm. They are also working on the development of models that can predict the likelihood of side effects more accurately. This will help them to improve the algorithm-based stimulation settings and future therapeutic outcome, and pave the way for further clinical trials.

About the study
The study was conducted within the NeuroCure Cluster of Excellence at Charité and the collaborative research center SFB TRR 295 ReTune. It was funded by the German Research Foundation (DFG).