Phosphatidylinositol 3-kinase, or PI3K for short, is a family of lipid kinases that plays a key role in the human body, performing functions such as cell division, metabolism, and cell growth. While class I PI3Kα is well-researched and an important target for cancer drugs, little is known about class II of this lipid kinase family. Now, researchers from the Leibniz-Forschungsinstitut für Molekulare Pharmakologie (FMP) have been able to shed light on its structure and function. The results pave the way for the development of new types of antithrombotic drugs. Moreover, it is likely that the inhibition of class II PI3KC2α is able to arrest tumor angiogenesis. The study has now been published in Nature Structural & Molecular Biology. A second paper published in Science provides another important lead.

Lipid kinases are among the promising targets of new classes of drugs, due mainly to class I PI3Kα, which plays a crucial role in carcinogenesis and metastasis. This enzyme is hyperactive in 30-40% of all tumors, leading to uncontrolled cell growth. For this reason, this well-researched lipid kinase has become a prime target for the development of anticancer drugs for the past two decades.
In contrast, little is known about its sister enzyme, class II PI3Kα. It is thought that this lipid kinase is likewise associated with numerous biomedical processes such as platelet aggregation or the formation of new blood vessels, referred to as angiogenesis. However, before its dysfunction can be better understood and targeted by drugs, it is essential to know exactly what this kinase looks like and how it functions.
This is precisely what researchers from the Leibniz-Forschungsinstitut für Molekulare Pharmakologie (FMP) have now managed to achieve. Using a combination of X-ray protein crystallography and cryo-electron microscopy (cryo-EM), NeuroCure PI Professor Volker Haucke’s research group has succeeded in resolving the structure of class II PI3Kα (PI3KC2α) and in describing the activation mechanism of the enzyme for the first time. These findings pave the way for entirely novel therapeutic approaches. The study has now been published in Nature Structural & Molecular Biology. 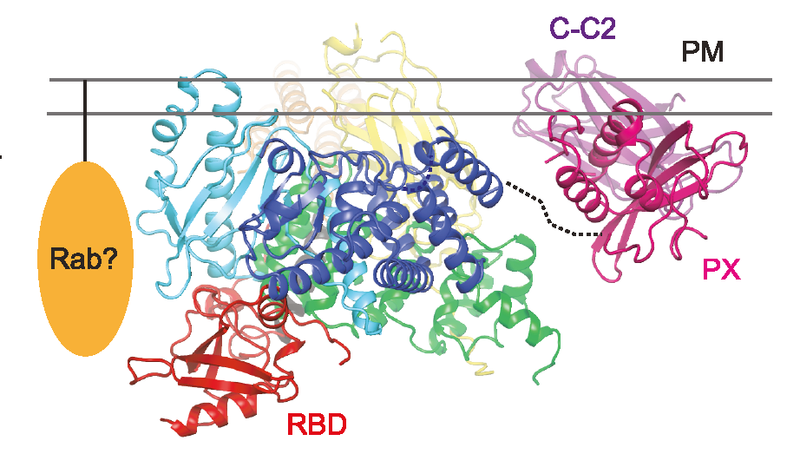 Structural model of active PI3KC2α at the plasma membrane. In this open conformation, the distal PX and C2 domains associate with plasma membrane lipids, while the Ras-binding domain (RBD) binds to a so far unknown Rab protein. Author: Wen-Ting Lo, FMP

Inhibition of kinase activity could help numerous patients
“Inhibition of kinase activity is thought to play a role in many applications in biomedicine, such as tumor growth and angiogenesis,” explained Volker Haucke. “It is also likely to be important for the inhibition of platelet aggregation.”
It is known, for example, that the kinase is required for platelets to form a thrombus. It is interesting to note that the function of kinase PI3KC2α is flow-dependent, i.e. it depends on blood pressure. If a drug were now used to inhibit the kinase, platelet aggregation would be arrested, especially in the case of an increase in blood pressure. However, most anticoagulants currently prescribed to patients to prevent thromboembolic events such as heart attack or stroke are also effective at normal blood pressure levels, which can have fatal side effects such as brain hemorrhage. The FMP researchers conjecture that PI3KC2α kinase inhibitors would have a significantly better pharmacological and biomedical profile than existing antiplatelet drugs.
Initial experiments with potential drug candidates have already demonstrated that inhibition of the kinase is possible in principle. Unraveling the structure and activation mechanism was key to this.

Conditions created for new drugs
The researchers have in fact discovered the structure of the binding pocket of the kinase that binds the lipid and adenosine triphosphate (ATP) as the “cellular currency”, enabling the transfer of a phosphate group to the lipid. The scientists now also know what kind of “molecular gymnastics” the kinase must undergo in order to be activated at exactly the right place in the cell.
“This information is crucial for developing a specific inhibitor that blocks only PI3KC2α, but no other related enzyme,” stated Wen-Ting Lo, the first author of the study. The team around Volker Haucke and Wen-Ting Lo is already collaborating with other scientists at the institute to find specific inhibitors that occupy the ATP-binding pocket of the enzyme, preventing the enzymatic reaction.

Kinase involved in the final step of cell division
But this is not all that FMP researchers have found out about PI3KC2α. Together with Emilio Hirsch’s research group at the University of Torino, the researchers have been able to demonstrate that the kinase is also involved in the final step of cell division, referred to as cytokinesis.
Patients lacking the kinase due to mutations were the starting point of the study published in Science. Besides having various organ defects, these individuals suffer from a clouding of the lens, known as a cataract. Using experiments in mice and zebrafish, the research team was able to show how the loss of function of the enzyme leads to cataracts.
The genetic material is duplicated and subsequently distributed to the two daughter cells during cell division. Membrane abscission eventually separates the daughter cells. In the absence of the kinase, however, this final cut fails to occur because a crucial lipid that can only be produced by PI3KC2α is missing. As a result, the lens epithelial cells suffer from impaired cytokinesis, which explains why these patients develop cataracts. The finding also has further implications: the realization that the kinase is an essential component of cytokinesis, i.e. the separation of daughter cells – this mechanism could also be of great importance for tumors that rely on continuous cell division. Consequently, PI3KC2α inhibitors would potentially also open up new perspectives in cancer therapy.