Genome folding in the mouse brain

A team led by MDC researcher and NeuroCure  PI Ana Pombo has deciphered the 3D structure of the genome in three cell types of the mouse brain. They not only discovered specific folding patterns but also found that very long genes almost completely lose their compact folded structure when most at work, as they report in “Nature”.

What happens in the brain when we learn something new? What happens when we develop an addiction or a neurological disease? Which genes spring into action in the brain cells at such moments? And how is the whole process regulated in the cell nucleus? These sorts of questions have been driving Professor Ana Pombo’s work for many years. The molecular biologist is the head of the Epigenetic Regulation and Chromatin Architecture Lab at the Berlin Institute for Medical Systems Biology (BIMSB), which is part of the Berlin-based Max Delbrück Center for Molecular Medicine in the Helmholtz Association (MDC). The current study by Pombo and her team, published in the journal “Nature”, has brought the scientists closer to answering to such questions.

3D maps of the genome

“After the human genome was decoded, it has become clear that only a very small part of the DNA actually contains the instructions for making proteins,” Pombo says. The other much larger part, she says, was initially considered superfluous and often dubbed ‘junk DNA’. “Yet it turns out that these mysterious regions of the genome contain the crucial information that regulates the activity of genes by direct spatial contacts with them or by influencing their position,” the researcher explains.

To learn more about these tiny switches that turn genes ‘on’ and ‘off’, Pombo and her team developed a technique called genome architecture mapping, or GAM for short, which they described in “Nature” in 2017. The technique creates 3D maps of the entire genome and uses statistical calculations to determine which sections of the genome prefer to connect with each other – in other words, the locations of the switches that regulate each gene.

Investigations performed directly in the cells

For their current study, led by Dr Warren Winick-Ng, they applied the GAM technique in combination with a procedure called immunoselection. They labelled three different cell types from the mouse brain to specifically assess their 3D chromatin structure. The cells investigated included two types of neurons and a specific type of glial cells that support and insulate the long projections of neurons. 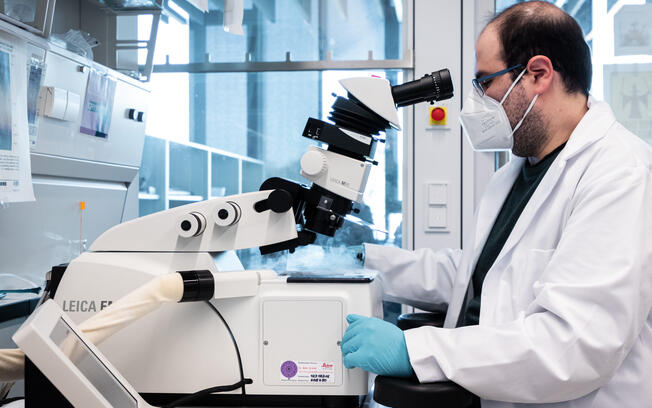 Warren Winick-Ng is working at the ultracryomicrotome, which can produce about 200 nm thick slices of brain tissues. The Pombo Lab processes these sclices for Genome Architecture Mapping.© Felix Petermann, MDC

The researchers also compared the spatial chromatin structure in these three very specialized cell types with that in embryonic stem cells, the latter which have yet to take on a specific cell lineage. “A major advantage of combining immunoselection with the GAM technique is that we can study all cells in their native tissue environment without having to remove them from their tissue context,” Winick-Ng explains.

“It was very exciting for us to discover that the folding of the DNA strands and the contacts between the individual genome elements, both on a large and small scale, are each highly specific in the different mouse brain cells,” lead co-author Dr Alexander Kukalev recounts. The researchers found particularly characteristic folding patterns in genes that are only transcribed and translated into proteins in one of the cell types studied. “We also came across contacts between genomic segments that are located really far apart in the chromosome,” Pombo reports. Together with colleagues from Ohio University’s Bioinformatics Lab, they searched for patterns in the contacting regions.

She says: “We discovered a small set of genomic ‘word pairs’ that appear within the neuron-specific contacts, bringing us closer to understanding the underlying molecular mechanisms, which we plan to study next.”

But what surprised the Pombo team most was the observation in all three cell types that very long genes, which can give rise to many different proteins, almost completely lose their compact folded structure during the transcription process. “They blossom like a flower bud,” is how Pombo describes the phenomenon. This has not been seen before using sequencing-based approaches, she says, adding that completely different genetic material “blossomed” depending on the brain cell type. Together with Professor Mario Nicodemi, Einstein-BIH Visiting Fellow hosted at the Pombo lab, they used polymer modelling to visualize the remarkable events. “Our discoveries are relevant because many of these long neuronal genes are associated with neurodevelopmental and neurodegeneration diseases like epilepsy or autism spectrum disorder,” says lead co-author Izabela Harabula.

It is very difficult to understand what these variations actually mean and how they ultimately lead to disease, because they often occur in the non-coding, ‘dark matter’ regions of the genome, which is actually the vast majority of the whole genome,

Genetic neurological diseases also stem from changes in the sequence of the genome itself, which can affect either protein-expressing genes or, more often, the genetic elements that regulate their expression. “It is very difficult to understand what these variations actually mean and how they ultimately lead to disease, because they often occur in the non-coding, ‘dark matter’ regions of the genome, which is actually the vast majority of the whole genome,” Pombo says. That is another reason that Pombo and Winick-Ng are excited about using their newly developed methods to examine brain tissue from deceased patients with amyotrophic lateral sclerosis (ALS), which they have received from Berlin’s Charité research hospital, in collaboration with Professor Frank Heppner and Dr. Helena Radbruch. This research is being made possible by collaborative funding from the NeuroCure Cluster of Excellence.

“Now that we have established our methods in mice, we can begin large-scale mapping of the 3D genome in human samples,” Winick-Ng says. Since each ALS patient has numerous variations in their genome sequence, they need to analyze tissue from multiple patients. “That’s the only way,” the researcher says, “we can understand the relationship between genetic variations that play a key role in the disease and the many changes in 3D chromatin structure we are likely to identify.”