Keeping the excitement under control

James Poulet's lab at the MDC uses advanced techniques to monitor the activity of networks of single sensory neurons in the brain. By listening in on hundreds of conversations, the scientists have discovered how a single signal from one cell manages to attract attention.

When we are awake, an incredible amount of sensory information flows into the brain, where it is filtered to distinguish important signals from all the noise. Crucial steps in this processing take place in the neocortex, which has a layered structure like six computer servers stacked on top of each other. Sensory nerves throughout the body collect information and transmit it along their wire-like axons into specific layers of this structure. Inside the neocortex it jumps to other neurons, and if the signal is strong enough, they generate an action potential and transmit a signal of their own. This electrochemical charge races up their axons into other layers of the cortex and is ultimately transmitted to other regions of the brain.

Along the way the signal can be amplified by excitatory neurons such as pyramidal cells (PYRs) or dampened by inhibitory neurons such as SST and PV cells. Inhibition keeps a signal from spreading until it overloads the system – as seen in conditions like epilepsy. Strangely, many excitatory PYR cells fire infrequently, in single bursts of activity. Now James Poulet's lab at the MDC has discovered how these quiet neurons manage to make themselves heard. Their work appears in the current issue of Nature Communications.

Whole-cell measurements of input and output
Studying the effects of single "spikes" from PYR cells required listening in on their activity, as well as that of neighboring PV and SST neurons. The types can be distinguished by the molecules they produce, but scientists haven't had a full picture of how they interact with each other as signals move through the sensory cortex.

"Whole-cell recordings are an advanced method that can be performed in living mice that have been genetically modified," says Jean-Sebastian Jouanneau, a postdoc in Poulet's lab and a lead author on the paper. "We can now apply it to specific neurons that we have identified visually. It's a unique approach that allows us to stimulate single neurons and monitor the tiny fluctuations in their electrical activity that generate action potentials. By stimulating the nerves one after another, and listening in on the network, we can check whether the cells are connected to each other and determine the effects a signal has."

The scientists carried out this procedure hundreds of times, breaking a record by monitoring four neurons simultaneously in each experiment. Putting all the data together required large-scale analysis by Jens Kremkow, a former lab member and also lead author on the paper.

A quiet voice that makes everything even quieter
The analysis produced some surprising results. A single spike from a PYR cell didn't provoke any activity in the other PYR cells or SST neurons it was attached to. But the PV neurons told a different story. The one-off signal from the PYR cell caused the PV neuron to fire – an amazingly efficient response.

The effects of this transmission were equally surprising. "The signal produced by the PV cell – after stimulation by the PYR cell – was passed on to target nerve cells and prevented them from generating action potentials of their own," Poulet says. "Those targets included PYR cells – the types of cells that had stimulated it in the first place! The result is a situation where one signal manages to silence all the neighbors."

The situation is a bit like a professor who comes into a classroom where people are chatting and shuffling papers around. If he starts speaking loudly, students often raise their own voices so that they can still hear themselves as well. But if he speaks very softly, they usually quickly quiet down – and may shush their neighbors – to hear what he is saying.

"We've seen this type of signal dampening before, but not in response to a single spike," Poulet says. "Observing this effect required studying the signal in an intact and active network. This could be an important mechanism that helps the brain filter subtle but important stimuli so that they will be heard despite the noise." 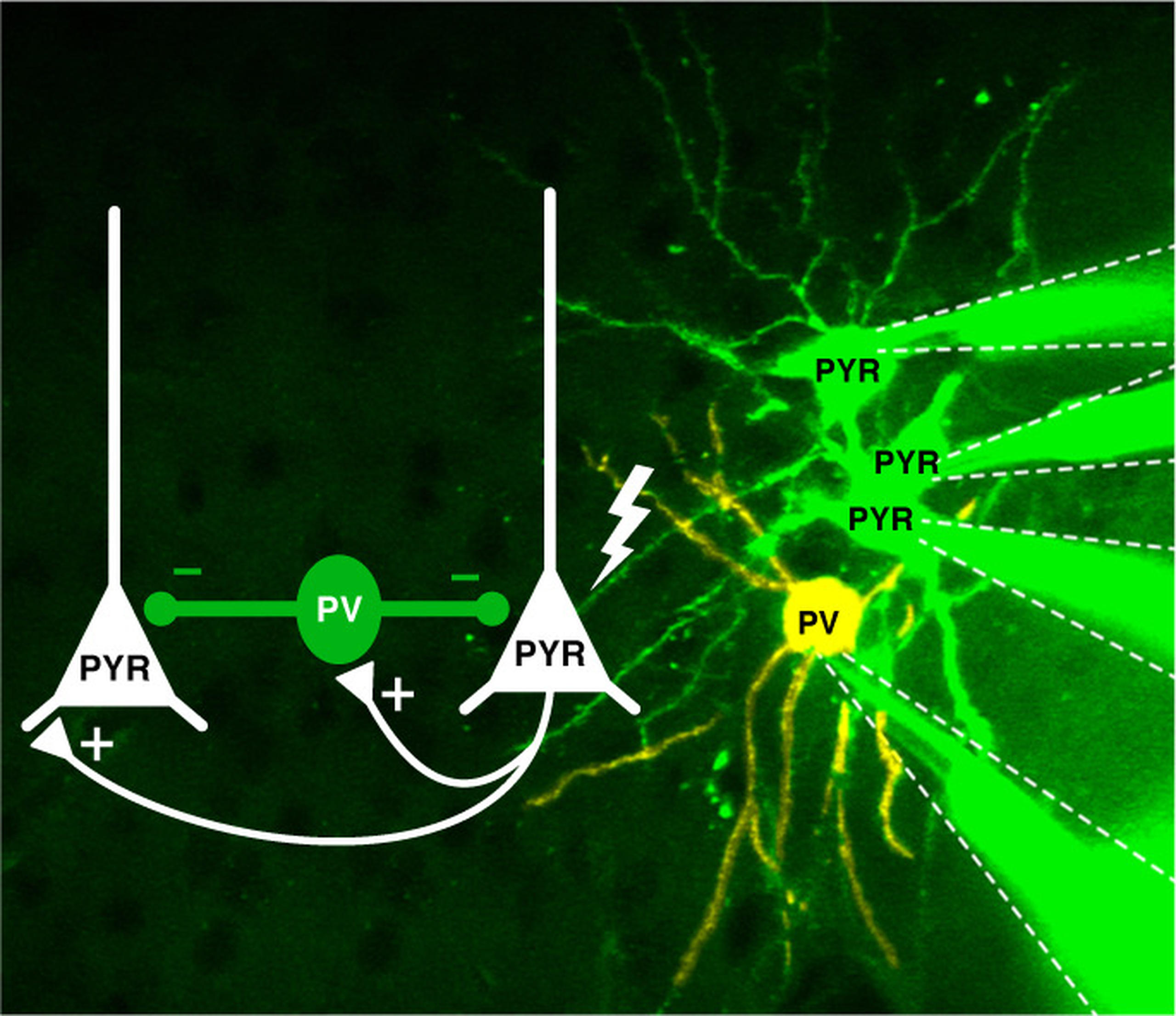 Sensory stimuli are processed in the somatosensory cortex in the brain. In the current study, the Poulet lab shows that pyramidal cells generate single signals that activate PV interneurons. These cells, in turn, stimulate other nerves but inhibit their firing, including the pyramidal cells that activated them in the first place.
© Jean-Sebastian Jouhanneau, MDC