For the first time, researchers at Humboldt Universität zu Berlin, Bernstein Center Berlin and NeuroCure Cluster of Excellence explain how the cellular architecture of spatial memory is related to its role in orientation. In the journal Neuron, they present a new technique with which they could examine the activity and interconnection of individual neurons in freely moving animals. This method allowed them to identify the circuits with which rats capture and learn the spatial structure of their environment.

Yet, it is hardly understood, which cells in our brain communicate when with each other. So far, scientists had to choose: they either investigated structure and connectivity by staining the cells or they measured their activity. To capture both simultaneously was meant to be almost impossible, particularly in freely-moving animals. Now Prof. Michael Brecht, head of the Bernstein Center Berlin, and his colleague Dr. Andrea Burgalossi were able to solve these problems with a new method. In collaboration with micro-mechanics of the Technische Universität Berlin, they developed a novel stabilization mechanism for the recording electrode. This allowed them to label cells in the spatial memory system of the rat (the medial entorhinal cortex) and at the same time to record their activity in freely-moving animals exploring their environment. Anatomical analysis provided important information about the interconnections of the recorded cells. With this new method the scientists could visualize for the first time the neuronal circuits involved in spatial memory formation.

In the rat’s spatial memory system, two major cell types contribute to orientation and spatial memory formation. When rats explore an environment, a subset of cells are active at the intercept points of a virtual grid spanning the entire surface of the environment. These cells, known as “grid cells”, are believed to form a map-like representation of the environment which enables the animal to “measure” distances and to estimate its position in space. The other cell type is active only when the animal faces a certain direction. These cells seem to act like a compass for the animal. How grid and head-direction cells cooperate for orientation and spatial learning was previously unknown. Michael Brecht and Andrea Burgalossi now noted that these two functional cell types are organized in well-defined anatomical patches, and they are strictly separated from each other. By visualizing the connections between the two cell types, the researchers could also reconstruct how they cooperate for the emergence of spatial memory.

Interestingly, they discovered very selective interconnections between the two systems of cells, which could enable the animal to integrate the spatial map information with the heading-direction information. These so-called “microcircuits” might therefore constitute the basic neural units for generating a global sense of spatial orientation. Alzheimer's disease has its origin in medial entorhinal cortex. Patients often suffer, besides other things, from disorientation. Knowledge about the organization and the interconnections between cells in this region of the brain could therefore also contribute to a fundamental understanding of Alzheimer's disease.

The Bernstein Center Berlin is part of the Bernstein Network Computational Neuroscience (NNCN) in Germany. The NNCN was established by the German Federal Ministry of Education and Research with the aim of structurally interconnecting and developing German capacities in the new scientific discipline of computational neuroscience. It was named in honor of the German physiologist Julius Bernstein (1835–1917). 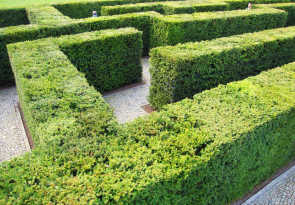 The specific wiring of two distinct cell types is the basis of our spatial memory. Picture: Henrik Gerold Vogel/pixelio.de