At the end of April, neuroscientist Prof. Michael Brecht, a recipient of the Gottfried Wilhelm Leibniz Prize in 2012, made his first trip to Brazil to present his research work to colleagues there. The DFG’s Latin America office organised two Leibniz Lectures to be delivered by Brecht in São Paulo and in Rio de Janeiro, along with an accompanying scientific programme. On the agenda were visits to renowned neuroscience research institutions at the University of São Paulo (USP), the State University of Campinas (UNICAMP) and the Instituto D’Or (IDOR) in Rio de Janeiro. 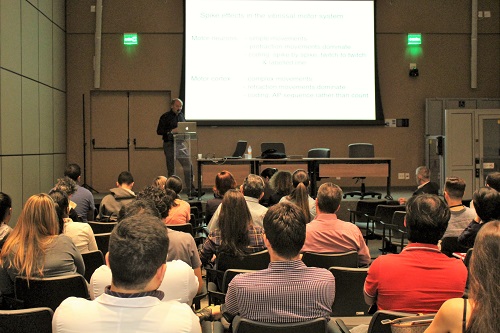 At the start of his visit, Brecht was able to see the largest hospital complex in South America, the university hospital of USP (Hospital das Clínicas), which has 2,400 beds and covers an area of 352,000 m². As well as providing free medical care, the hospital provides academic training and conducts basic and applied research. It has 62 laboratories, which are used by more than 120 working groups.

Among these is the neurostimulation lab, which is concerned with the study of neurological disorders with a particular focus on the treatment of stroke patients. Around 15 million people worldwide are affected by strokes, with a third of them experiencing serious complications and a third of cases proving fatal. Director Prof. Adriana Conforto explained the work she carries out in the lab, in which she is assisted by early career researchers in neurology, physiotherapy and occupational therapy.

One frequent consequence of a stroke is weakness in the hands, and one of the research projects in the group is investigating whether stimulation of the brain or nerves can result in improvements and prevent deterioration, which can extend as far as paralysis or physical disability.

It was in this context that the researchers at the institution invited Brecht to present some of his work. His lecture, entitled “Neural Coding and Suppression of Movement in the Motor System”, was followed attentively by around 50 attendees from a wide range of the hospital’s institutes and clinics and from USP. He emphasised in particular the recent and often neglected findings which indicate that neurons in the motor cortex are responsible for suppressing as well as carrying out movements.

Doctoral researcher Joselisa Paiva, who is studying restless legs syndrome (RLS), found that Brecht’s lecture at USP provided a new perspective for the interpretation of her research results. The cause of the syndrome, first described in 1672, is still unknown. “We wondered whether RLS might be caused by the neurons in the motor cortex being unable to transmit the command to suppress the movement. This interpretation has never been mentioned before in the relevant literature,” she explained.

Brecht’s next stop was the city of Campinas, not far from São Paulo, where he paid a visit to the Brazilian Institute of Neuroscience and Neurotechnology (BRAINN) based at UNICAMP. The institute is funded by DFG partner organisation FAPESP and concentrates on diseases of the brain, especially strokes and epilepsy. Approximately 50 million people of all ages live with epilepsy and the condition currently has no cure. BRAINN brings together researchers from a wide range of disciplines, including genetics, neurobiology, pharmacology, neuroimaging, computer science, robotics, engineering and physics, who collaborate to find new approaches to better understand, treat and prevent brain diseases.

BRAINN coordinator Prof. Fernando Cendes gave the German guest a guided tour of the labs and other facilities. Six early career researchers also had the opportunity to present their projects to Brecht. Their topics ranged from the use of zebrafish to study epilepsy to the optimisation of the brain-computer interface to control prostheses and wheelchairs via brain signals. “It was fascinating to learn about the work being done by these young researchers. The projects are very interesting and of a high quality standard,” said the Leibniz Prize recipient.

From Campinas, Brecht travelled on to Rio de Janeiro, where he visited the Instituto D’Or (IDOR) teaching and research centre. This not-for-profit private institution offers undergraduate and postgraduate courses and is actively involved in clinical research, especially in neuroscience. Brecht was able to visit the modern laboratories and discover a variety of research projects addressing topics such as neuroplasticity, cognitive neuroimaging and mini-brains.

At all three stops on his itinerary, Brecht was able to meet with early career researchers. At IDOR, he took part in a discussion with students and doctoral researchers, giving them an insight into his everyday work as a researcher. Other topics covered included the importance of basic research to science and its contribution to clinical practice, competition in neuroscience and the highs and lows of a research career. The discussion also explored aspects of science encountered in both countries, such as the inadequate employment situation in research.

Brecht expressed his opinion that it is not always easy to carve out a career as a researcher and abide by a scientific hypothesis. His advice to the students and early career researchers around the table was: “You need to stand firm in the face of claims that something is impossible and dare to attempt it.”

Doctoral researcher Theo Martins was motivated by the conversation with the experienced researcher. “It’s interesting to hear that even successful researchers like Brecht encounter difficulties in their careers that need to be overcome. In a sense, it’s reassuring for us and it encourages us to keep going and find our niche in the world of research,” he said.

In view of the considerable interest in developing cooperative partnerships, Dr. Kathrin Winkler, Director of the DFG’s Latin America Office, presented the DFG’s funding programmes and joint initiatives with partners in the region. At USP, she drew attention in particular to funding opportunities offered together with FAPESP. At IDOR, funding instruments for early career researchers were presented together with the German Academic Exchange Service (DAAD) and the Alexander von Humboldt Foundation.