A certain type of immune cells that assumes new functions in the intestine proves to be an effective aid in fighting autoimmune disorders. This discovery was made by researchers of the Deutsches Rheuma-Forschungszentrum Berlin, an institute of the Leibniz Association, the NeuroCure Cluster of Excellence  and the Yale University School of Medicine, and is presented in the latest issue of the scientific journal Nature*.

The immune system is supported by different subsets of T-helper cells. One of these subsets are the TH17 cells which were only discovered a few years ago. What is known about these cells is that they are extremely active and they can participate in fighting bacteria and viruses. But if this activity is directed against a person’s own body, as with autoimmune disorders, it can get dangerous.

In the case of autoimmune diseases, such as multiple sclerosis or rheumatism, body cells are identified as alleged foreign matter and attacked. This misconduct can lead to severe inflammation and considerable damage of the organs affected. Therefore, healing becomes difficult as it requires the complete immune system to be blocked, which would also render it defenceless against disease agents.

A team of researchers surrounding the neuroimmunologist Enric Esplugues of the Deutsches Rheuma-Forschungszentrum Berlin and the NeuroCure excellence cluster made a promising discovery. In his working group Dr. Esplugues is examining the cellular and molecular principles leading to the development and healing of inflammatory diseases.

In a recent study the team of researchers is dealing more closely with the TH17 helper cells that are responsible of producing a proinflammatory protein.

“What makes the discovery very interesting is that we knew many things about the factors that are required for the generation of these ill-making cells but so far we didn’t know anything about the mechanisms controlling the ill making characteristic of these helper cells and how to use them in order to control autoimmune disorders”, said Enric Esplugues.

In it´s study the team found the answer how and where these “dangerous” cells could be controlled. They showed how important is the small intestine in all of these process. Once in the small intestine, the specific helper cells acquired characteristics stopping unwanted immune reactions while others were eliminated from the body via the intestinal tract.

The researchers were astonished when they observed that the helper cell TH 17 could be “reprogrammed” in the intestine changing drastically their function and making them a useful helper for immune diseases.

“This is a completely new discovery and very interesting as they can inhibit the activity of the immune system preventing excessive inflammatory reactions that are caused by autoimmune diseases. These findings suggest that it may be possible to avoid a life-threatening immune response caused by an excess of the TH17 cells by redirecting them, and therefore controlling them in the gut,” explains the scientist.

This awakens the hope of making a first step towards healing autoimmune disorders. The researchers hope to contain diseases, such as rheumatoid arthritis and multiple sclerosis, and develop possible new therapies in the future. 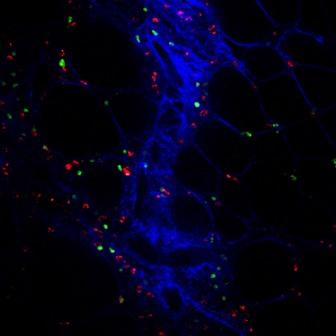 TH17 cells (in green) in an inflamed gut