Reading the fine print of perception

Wine connoisseurs recognize the vintage at the first sip, artists see subtle color variations and the blind distinguish the finest surface structures.  Why are they considered superior to laymen in their field? Researchers at Charité – Universitätsmedizin Berlin, the Bernstein Center Berlin, the NeuroCure Cluster of Excellence and the Otto-von-Guericke University of Magdeburg, have determined which areas of the brain are particularly active when perceptual skills are trained. In the current issue of the journal Neuron*, they show how one becomes an expert: not by increasing the resolution with which our brain encodes our environment. Instead we learn by improving our ability to distinguish subtle details better.

The researchers from the research group of Prof. John-Dylan Haynes, Director of the Berlin Center for Advanced Neuroimaging at the Charité, have examined, together with colleagues from Magdeburg, how brain activity changes across the course of a learning process.  For this, they measured changes in nerve cell activity in the brain with the help of functional magnetic resonance imaging (fMRI) while participants learned to tell differences between visual images. Their reasoning was: if the learning effect is primarily based on an increasingly detailed representation of the stimuli, then the visual center should be involved in learning. However, if progress is due to an improved interpretation of the stimuli in the brain, then learning should involve brain areas for decision making.

“The fMRI measurements clearly showed that the activity in the visual center remained the same during the entire learning process,” said Prof. Haynes. “However, a region in the prefrontal cortex, which plays an important role in the interpretation of stimuli, was becoming more and more involved”.  Hence, the researchers concluded that the learning process takes place at the level of decision making. “If our perception sharpens in learning, then this is not so much due to the fact that more information reaches the brain,” concluded Professor Haynes. “Instead we learn more and more to correctly interpret the given information. We see details in pictures that we were not aware of at the beginning.”

The researchers investigated the learning processes using simple geometric images. In the experiment, the twenty subjects looked at a small stripe pattern on a screen for a short time. They should decide in which direction the stripes pointed. Over time they could recognize details better and better. “Now it would be possible to use our approach to investigate whether similar effects also holds true say for wine connoisseurs or top chefs,” said Prof. Haynes.

Thorsten Kahn, PhD student at the Bernstein Center for Computational Neuroscience developed a mathematical model for this study that predicts the learning processes in the brain very precisely. “Such models are very important to systematically analyse the data,” said the young researcher. “The collaboration between modeling and data collection works particularly well in the Bernstein Center where psychologists, physicians, physicists and mathematicians work together.”

FMRI is a method that allows to brain activity non-invasively using strong magnetic fields. Over the last few years the research group of Prof. Haynes has been involved in developing approaches that improve the readout of information from such brain signals. 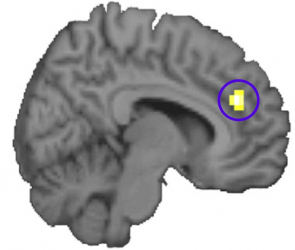 The region in the prefrontal cortex, which plays a role in increasing perceptual accuracy (“perceptual learning”).