The key to proper muscle growth

Three oscillating proteins cause new muscle cells to emerge from muscle stem cells in a balanced manner. In a paper being published in the journal "Nature Communications", a team led by MDC researcher Carmen Birchmeier explains in detail how this process works.

When a muscle grows, because its owner is still growing too or has started exercising regularly, some of the stem cells in this muscle develop into new muscle cells. The same thing happens when an injured muscle starts to heal. At the same time, however, the muscle stem cells must produce further stem cells – i.e., renew themselves – as their supply would otherwise be depleted very quickly. This requires that the cells involved in muscle growth communicate with each other.

Muscle growth is regulated by the Notch signaling pathway

Two years ago, a team of researchers led by Professor Carmen Birchmeier, head of the Developmental Biology/Signal Transduction Lab at the Berlin-based Max Delbrück Center for Molecular Medicine in the Helmholtz Association (MDC), showed that the development of stem cells into muscle cells is regulated with the help of two proteins, Hes1 and MyoD, which are produced in the progenitor cells in an oscillatory manner – i.e., there are periodic fluctuations in the number of cells produced.

Both proteins are involved in the Notch signaling pathway, a widespread mechanism by which cells respond to external stimuli and communicate with other cells. The signaling pathway is named after its receptor “Notch,” onto which the ligand “Delta,” a cell surface protein, latches.

“In our current study, we have provided unequivocal evidence that oscillation in muscle tissue is not just some strange phenomenon of the cells involved, but that these rhythmic fluctuations in gene expression are actually crucial for transforming stem cells into muscle cells in a balanced and controlled manner,” says Birchmeier.

Together with researchers from Japan and France, Birchmeier and four other scientists at the MDC also uncovered the crucial role of a third protein that, along with Hes1 and MyoD, forms a dynamic network within the cells. As the team reports in the journal Nature Communications, this protein is the Notch ligand Delta-like1, or Dll1 for short. “It is produced in activated muscle stem cells in a periodically fluctuating manner, with the oscillation period lasting two to three hours,” Birchmeier explains, adding: “Whenever a portion of the stem cells expresses more Dll1, the amount in the other cells is correspondingly lower. This rhythmic signaling determines whether a stem cell becomes a new stem cell or develops into a muscle cell.”

The Hes1 protein sets the pace in the stem cells

In their experiments with isolated stem cells, individual muscle fibers and mice, Birchmeier and her team further investigated how the Hes1 and MyoD proteins are involved in muscle growth. “Put simply, Hes1 acts as the oscillatory pacemaker, while MyoD increases Dll1 expression,” says Dr. Ines Lahmann, a scientist in Birchmeier’s lab and a lead author of the study along with Yao Zhang from the same team. “These findings were demonstrated not only in our experimental analyses, but also in the mathematical models created by Professor Jana Wolf and Dr. Katharina Baum at the MDC,” Birchmeier says.

With the help of gene-modified mice, the researchers obtained the most important evidence that Dll1 oscillation plays a critical role in regulating the transformation of stem cells into muscle cells. “In these animals, a specific mutation in the Dll1 gene causes production of the protein to occur with a time delay of a few minutes,” Birchmeier explains. “This disrupts the oscillatory production of Dll1 in cell communities, but does not alter the overall amount of the ligand.”

“Nevertheless, the mutation has severe consequences on the stem cells, propelling them to prematurely differentiate into muscle cells and fibers,” reports Zhang, who performed a large portion of the experiments. As a result, he says, the stem cells were depleted very quickly, which resulted, among other things, in an injured muscle in the mice’s hind legs regenerating poorly and remaining smaller than it had been before the injury. “Quite obviously, this minimal genetic change manages to disrupt the successful communication – in the form of oscillation – between stem cells,” Zhang says.

This knowledge could lead to better treatments for muscle diseases

“Only when Dll1 binds to the Notch receptor in an oscillatory manner and thus periodically initiates the signaling cascade in the stem cells is there a good equilibrium between self-renewal and differentiation in the cells,” Birchmeier concludes. The MDC researcher hopes that a better understanding of muscle regeneration and growth may one day help create more effective treatments for muscle injuries and diseases. 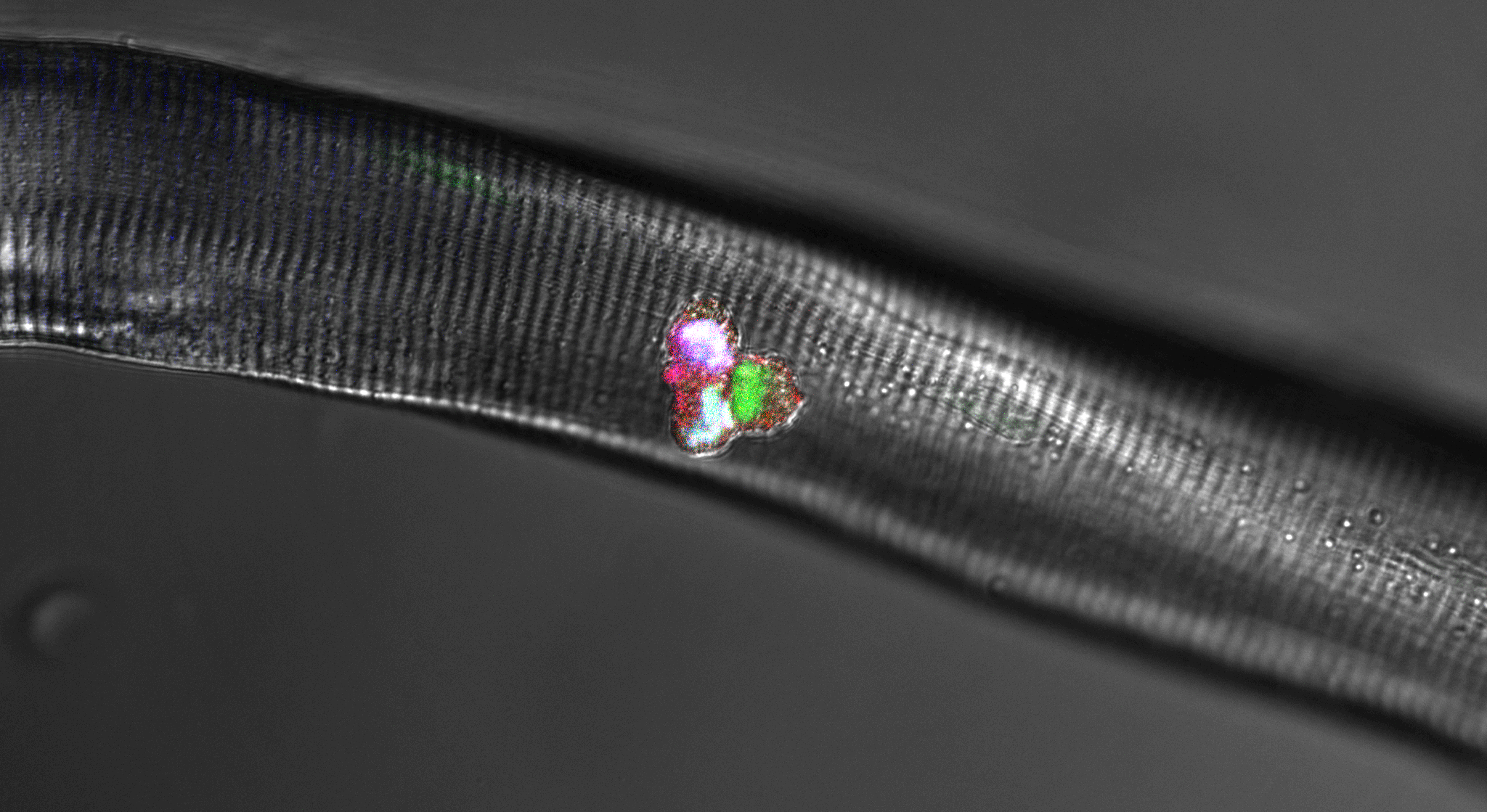 Immunofluorescence analysis of a group of proliferating stem cells associated with a muscle fiber (grey). The stem cells produce Dll1 (red) and MyoD (green). Two of the cells produces MyoG (blue): They are differentiating to form a new muscle cell. Note that the overlay of blue, green and red appears as White. © Birchmeier Lab, MDC